A precise, light and responsive action is essential to truly enjoy playing a mechanical action instrument. Long-term reliability is also crucial. A mechanical action Ruffatti organ utilizes truly innovative materials and advanced techniques which allow us to achieve such results.

The Tracker Connections
Traditionally, the tracker connections between keys and windchests have been made with metal wires or thin slices of wood, called “trackers”. If the tracker runs are long, weight adds up: the springs at the pallets need to be strong enough to support the entire action, and this contributes to the detriment of a responsive and light touch at the keyboards. In addition, wood can easily warp with humidity thus creating friction and causing adjustment problems.

A new, hi-tech material has been introduced for the tracker runs: carbon fiber wire, a material which is widely used in space technology and top-end racing sports. Its characteristics are astonishing: 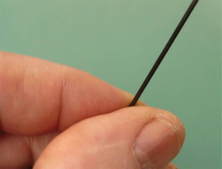 Carbon fiber wire
Being a much stiffer material, carbon fiber requires fewer mechanical supporting connections, thus reducing friction. It is therefore ideal for long tracker runs, which are necessary when a console needs to be detached from the organ case. A detached console allows the organist to better evaluate the tonal balance and often enables a more efficient layout of the choir. 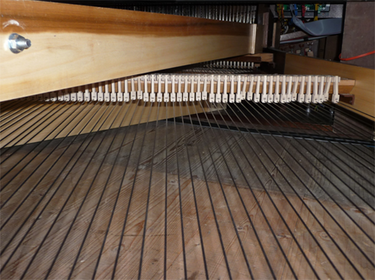 All mechanical elements in Ruffatti organs are designed to reduce friction, but also to allow for easy replacement. Many of them are assembled with a “clip-on” technique, such as in the elements shown below. Any replacement part can be installed in seconds.
The two elements of this “pendulum” are assembled by simple pressure and can be taken apart again in seconds. 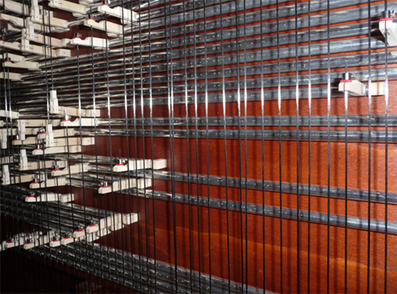 A rollerboard featuring carbon fiber wire and wooden elements which utilize the “clip-on” technique
The “Floating” Action
Frequent mechanical adjustments are often necessary on mechanical action organs. At the change of
seasons, the tension of the trackers can become excessive, producing ciphers, or notes that play out of control. Likewise, the tension can become insufficient, reducing the “travel” of the keys. Such behavior causes difficulties for the player and higher maintenance costs.

The main cause for the instability of a mechanical action is the influence of changes in humidity, which affect wood. The use of carbon fiber reduces the problem, but other parts can cause residual movement. Ruffatti organs utilize a truly effective self-adjusting device for each of the keyboards and for the pedalboard, which eliminates the problem. Keyboards do not go out of adjustment and always perform reliably and correctly.

The stop action
The stop action in our tracker instruments can be totally mechanical, electric, or both (called “dual action”, by which stops can be activated both mechanically and electrically). In the latter two instances, we utilize special solenoids to pull the sliders.

Friction can vary due to climatic changes, and that can affect the speed of operation. The “smart solenoid” that we use is able to automatically detect the resistance of the sliders, and adjusts its force accordingly. As a result, the speed of operation of the stops remains constant under any climatic conditions, a feature that can make the difference when rapid registration changes are required. 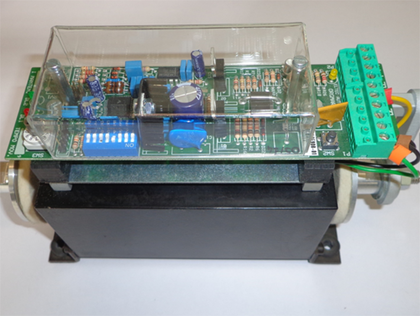 The “smart solenoid” that pulls the sliders at the windchest
Electric Couplers
When coupling two or more keyboards in a mechanical action organ, the weight, or key resistance, at the “receiving” keyboard increases, and that makes playing more difficult. To avoid the problem, especially in large instruments, electric couplers are introduced in some cases. They maintain a lightweight and constant key touch no matter how many couplers are engaged. This system is not new, but a few technical features need to be introduced to make it truly efficient and reliable. Let’s look at a few of them.

Precision is of the utmost importance. If we play two or more sounds from different divisions with the same key, it is essential that these sounds are perfectly synchronized, producing a single attack: this is where the advanced technology comes in: at the “tail” of the key levers we install optical sensors, which read the mechanical movement of the key precisely and send a signal to the windchest. This guarantees perfect synchronization between the mechanical and electrical systems.

In the windchest, a series of magnets is connected to the mechanical pulldowns in such a way that both the mechanical and the electrical action of the pallets is guaranteed. The magnets are located inside the pallet box, well protected, out of sight, and, at the same time, noise-insulated. 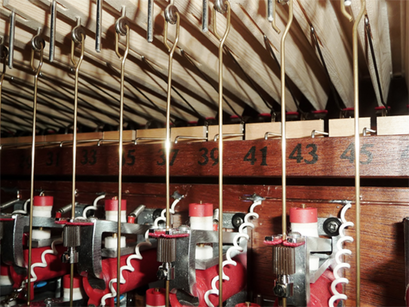 Click below for find interesting information on our Research and our Innovation on Mechanical Organs.